The present and future of the energy industry is an issue which motivates Kentucky policymakers, business leaders, and citizens across the commonwealth. Yet with so much focus on where the state and the nation are headed, it is important for historians to provide a better understanding of Kentucky's long relationship with energy production. Most histories of coal mining begin in the latter decades of the 1800s and tend to focus on coal mining in Eastern Kentucky. Civil War Governors documents, however, suggest an older and more geographically diverse story. The document excerpts on this page suggest some of the ways that Civil War Governors could be used for new historical research which can inform contemporary decision making. 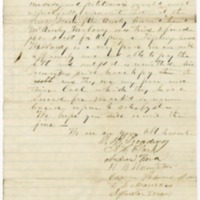 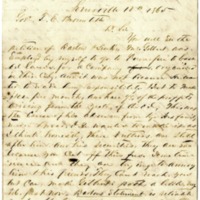 Mr. Gilbert was Employed by myself to go to Tennessee to lease oil lands for a Company of us organized in this City, and it was not because He wanted to Evade Any responsibility. But to make $100—per month, and have 1/8, of the proffits arising from the yeald of the oil, This was the Cause of his absence, from Ky—His family needed Bread, & He wanted to make it as I think honestly, 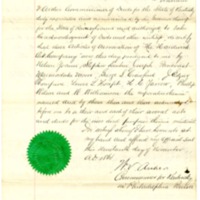 Name. 1. The corporate name of said Company shall be “The Hardwick Oil Company.”
Objects. 2. The objects of the formation of the said company are the searching and mining for Petroleum and other minerals, and producing, refining and vending the same.
Capital Stock. 3. The Capital Stock of the said Company shall be the sum of One million dollars divided into Forty thousand Shares of Twenty five Dollars each.
Directors. 4. The affairs of the said company shall be managed by a Board of seven Directors to be chosen annually at the time and place specified in the By Laws. The Board for the first year shall consist of the following stockholders viz—J. Edgar Thompson Joseph Pancoast Marmaduke Moore Stephen Benton Nelson Yocum Geoge L Crawford and H. C. Yarrow
Operations. 5. The Operations of the said Company are to be carried on in ^Clarke^ Estill and Powell Counties Kentucky in the town of Irvine in said Estill County in the State aforesaid 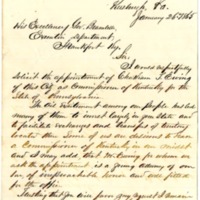 [I] would respectfully solicit the appointment of Chatham T. Ewing of this City as Commissioner of Kentucky for the State of Pennsylvania. 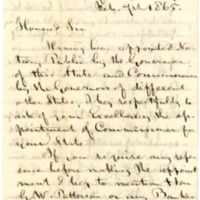 We sent down some men the other day & after spending nearly a thousand dollars at Louisville for tools, they were obliged to leave on account of the murders & robberies committed in the neighborhood—Allen County

Could your Excellency adopt some plan or station a force there it would add vastly to the resources of the State as it has already in Pennsylvania. If I mistake the value & export of Oil from that State well nigh competes with that of Cotton in its palmier days & is at any rate in a high degree worthy of the forstering care of your Excellency, and the National Government.

Sir, you will please answer the following questions—sending your letter to Lancaster
1. Whether or not you are engaged with a Northern Co for the purchase of land on the Big South Fork of the Cumberland River?
2. What is the amt Cap Stock of said Co?
3. Do you or not own the Beaty Oil well? and a large quantity of land connected with the same above ^both^ the pumps on said river?
4. Is it or not your intention to shortly proceed to remove those pumps? and will or not that be absolutely nescessary to render your property above that place of value. 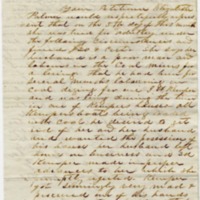 Elizabeth Palmer would respectfully represent that on the 5th day of this month she was tried for adultey under the following circumstances and fined $20 & cost— she says her husband is a poor man and labours in the Coal mines for a living. That he has been for several months labouring in coal diging for one J. H. Kemper and was living duing the time in one of Kempers houses— all Kempers boats being loaded with coal he desired to get rid of her and her husband and wanted the posession of his house her husband left home on business and sd Kemper made improper advances to her which she promptly regected. Kemper got seemingly verry mad & procured one of his hands a dependent of his to watch her house in the night time who did so and climbed up on the chimney for the purpose of so doing and then swore he saw a man in her Room and heard her bed making a noise She says as she lives she is not Guilty— nor never has been of such an offense

William Gross states that he lives in Cloverport Kentucky and whilst Margolyes kept his tavern, he was employed by the coal & oil company on there road and the said Tavern being on the immediate side of the road makes me well acquanited with said Margolyes and his tavern.

← Food, Farming, and the Domestic Economy
Slavery and Capitalism →
Coal, Gas, and Petroleum