The history of the American Civil War has often been criticized in the past for being too focused on the war and not enough on the society that fought it and how the war brought massive changes to Americans of all descriptions. Recent military historians have emphatically corrected that, showing time and again how citizens became the soldiers of the 1860s and blurred the lines between civilian life and the military like never before. Civil War Governors can certainly add to that discussion, but the documents here can help open new windows onto the military history of the war. Historians need a better understanding of how the war was fought, how the military acted as an institution and as a bureaucracy. Showing the interaciton of federal and state and civil and military power in Kentucky, Civil War Governors is an excellent place to ground a new phase of United States military history research. 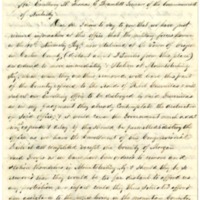 [W]e have just received information at this office that the military forces known as the 40th Kentucky Regt now Stationed at the Town of Grayson in Carter County, (distant about 25 miles from this place) are ordered to move immediately & Station at Mountsterling Ky, which when they are thus removed will leave this part of the Country exposed to the Raids of Rebel Guerrillas…. I find that they eighth & ninth Congressional Districts of Ky have furnished more Volunteers than any other part of the state & have received less Protection than any other part in fact a large section of each District have received no protection at all but the Government through an erroneous disposition of the forces intended for the protection of that part of the state have suffered those people to be robbed murdered and the Country almost desolated by the Rebel Guerrillas East Tennessee has not suffered worse than the People of Morgan, Wolfe Breathitt and adjoining Counties 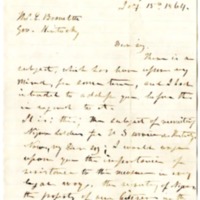 The subject of recruiting Negro soldiers for U S service, in Kentucky. It is rumored here that Agents have been sent from other states for that purpose. This thing of plundering our people ought & should be stopped if possible, even recruiting for our own quota would be injurious & demoralizing to our Slave population by the consent and approval of the owner himself I think a firm stand taken by you against it, would have a good effect and even prevent the U. S. Government, from attempting it in our State. 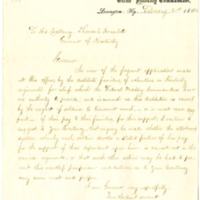 In view of the frequent applications made at this office, by the destitute families of volunteers in Kentucky regiments, for relief which the Federal Military Commanders have no authority to provide; and in asmuch as this destitution is caused by the neglect of soldiers to transmit much,—or, in most cases any part,—of their pay to their families for their support; I venture to suggest to Your Excellency, that enquiry be made whether the allotment system; whereby each soldier devotes a stated portion of his pay for the support of those dependent upon him, is carried out in the various regiments; or that such other action may be had, to prevent this needless pauperism and distress, as to Your Excellency may seem meet and proper. 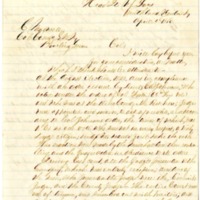 During last court, all the Judges presented to the Grand jury, which was Entirely secession; and two of the men, who presented the Judges were the, Circuit Judge, and the County Judge—The entire Court was one of treason, and numberd out with traitors; … The meanest set of secessionists that ever existed under the canopy of Heaven, live in this immediate section of Ky; and we must adopt means, & severe ones too, to prevent a resistance which is almost sure to take place sooner or later, unless prevented 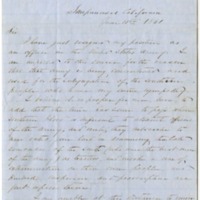 I have just resigned my position as an officer in the United States Army. I am impelled to this course for the reason that that army is being concentrated and used for the subjugation of the Southern people who have my entire sympathy. I believe it is proper for me, here, to add that the time has come to pass when Southern blood is sufficient to attaint officers of the army; and unless they subscribe to new oaths, join bond in denouncing their late comrades of the south (who were the best men of the Army) as traitors, and invoke a war of extermination on their own people, and kindred suspicion and proscription are put upon them. I am unable at this distance to understand the exact position that Kentucky occupies in the great struggle between the
two sections, but I cannot believe that she can or will remain long a neutral spectator 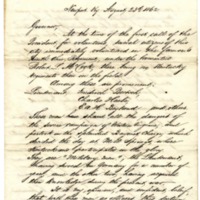 At the time of the first call of the President for volunteers, several citizens of this city immediately volunteered in the famous Ninth Ohio Regiment under the lamented Robert L. McCook, there being no Kentucky regiments then in the field. … These men have shared all the dangers of the severe campaign of Western Virginia, and partook in the splendid Bayonet Charge, which decided the day at Mill Springs, where Kentuckians participated in the glory. They are “Military Men.”, the Lieutenant having served in Germany for a number of years, and the other two having acquired their knowledge during the present war. … The regiment would be exclusively German, who would flock under the banner of these well tried men with alacrity from all parts of our state. 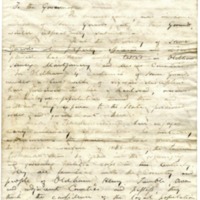 The Undersigned have enjoyed many military opportunities for military experiences—the former in Texas during the guerilla warfare of 18436-40, the latter for more than 30 years in the organizing and governing militia corps in this Kentucky. … They therefore propose to raise a Regiment of militia for 3. months service … We will go wherever your Excellency directs and subsist on the country trusting on the bounty of Union men and the fears of disloyal men to feed us. If allowed to operate in the section above indicated we will guarantee to afford an efficient military police there—to restore the respect for State and Federal authority now so sadly shaken,—preserve the publlic records, overawe the disloyal and in all the hearts of true men. 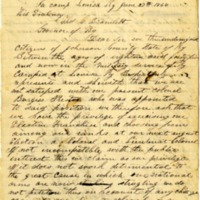 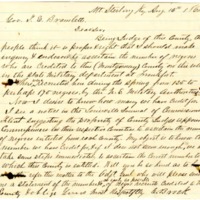 Being Judge of this County, the people think it is proper & right that I should make inquiry & endevor to ascertain the number of negroes who are credited to this (Montgomery) County on the rolls in the state Military department at Frankfort. There ^were^ recruited here during the spring from 125 to perhaps 175 negroes, by the U. S. Military Authorities. Now I desire to know how many we have credit for. 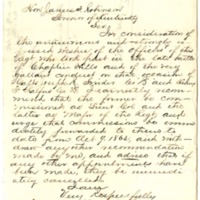 In consideration of the unanimous and strongly expressed wishes of the officers of this Regt who took part in the late battle of Chaplin Hills and of the very gallant conduct on that occasion of Capts Joseph. R. Snider Co “B” and Henry F Kalfus Co “D,” I earnestly recommend that the former be commissioned as Lieut Col and the latter as Major of the Regt, and urge that commissions be immediately forwarded to them to date from Oct 9. 1862, and withdraw any other recommendation made by me, and advise that if any other appointments have been made, they be immediately cancelled. 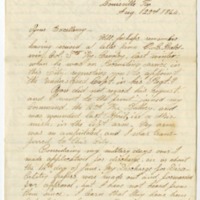 I went to the “front.”—joined my Command, the 2nd Ky. Battery, and was wounded last April, in a skirmish, in the left arm. My arm was amputated. … Disiring my discharge, I made application for Commission in Colored Troops. in order to get out of the service as a Com. Officer, by resignation. Yet I do not approve the arming of negroes. … I request you to Commission me in some Ky. Regt. to enable me to resign—to get out of service. Will you do so? Having the gift of oratory, I desire to stump the States of Ill. and Ind. for the Candidate of the Chicago Convention. But I cannot do so, as I am now situated. You can enable me to do so. Will you? You can see what influence a Private soldier can have on the Stump who has lost a limb in the service. 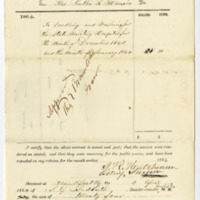 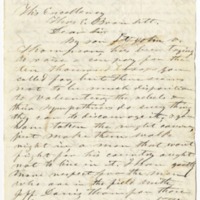 My son Lt John V. Thompson, has been trying to raise a company for the ten thousand troops you called for, but there seems not to be much disposition to volunteer the rebels & their sympathies do every thing they can to discourage it; & you have taken the right course, just make them walk right in, a man that wont fight for his country ought not to live in it. I have greatly more respect for the men who are in the field with Jeff. Davis, than for those who are among us plotting the overthrow and destruction of the Government that protects them & all they possess, for them I have no respect, they have been handled with gloves too long.