Recent historians have overhauled our understandings of slavery's role in the development of American capitalism. Once considered to be a feudal exception to the story of a growing national economy, historians have begun to recognize that the emergence of a free market was closely tied to the bondage of millions of enslaved people. Kentucky had a peripheral role in the cotton economy that fueled slavery elsewhere in the South, though the state enabled that trade by selling men and women to cotton planters and supplying the food and manufactured goods that allowed plantations to sustain themselves. In Kentucky, slaveowners tended to own fewer total slaves, but the number of slaveholding families was among the higest anywhere in the antebellum South. The Civil War Governors documents featured here help begin to show the strength and diversity of a slavery-driven economy at its height and its fragility as it collapsed. 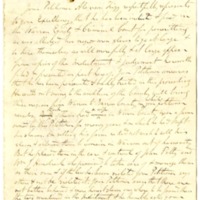 [Petitioner] could not owing to the condition of the County well bring these negroes from Warren to Barren County, in ^which^ your petitioner resides. ^Each^ of them had ^a wife^ in Warren County near a farm owned by this Petitioner for many years & on which he had kept his slaves. On selling his farm he did not want to sell his slaves & allowed them to remain in Warren out of humanity. But he placed them in the care & control of John Petty and Wm G Hendrick who promised to take care of & manage them as their own & if the law has been violated your Petitioner says others & not he violated it. Your Petitioner avers that there are not better behaved & more honest slaves any where to be found than the two mentioned in the Indictment & he humbly asks your Excellency to remit the fine imposed upon him 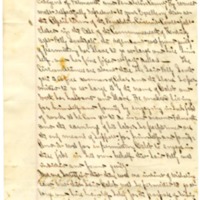 Polly Southgate is a free woman of Color and the slave so permitted to go at large is by the name of Caleb and both her husband and Slave. He makes a living for himself and family be engaging in Such jobs of work as he can get to do in and around Falmouth and the earnings of his labor so performed are the only means of Support for himself and family … Should she be required to pay the full amount of said fine. She will be compelled to sell her Slave and husband to do so. and will then be without any means of Support whatever for herself and children… 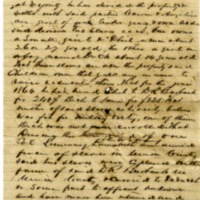 The affiant B P Cissell states that in the year 1856 he qualified as the Guardian for Samuel, William, Sarah, Carrie & Angeline Ten, that Samuel, William & Sarah has arrived at Majority he has divided the property & settled with said parties Carrie & Angiline are girl of quite tender years, & own under said division two slaves each, one owns a small girl & Phil, a man about 26 or 27 yrs old, the other a girl a boy named Dick about 14 years old. That these slaves are all the property said Children own that yield any income to raise & educate them. That for the year 1864 he had hired Phil to D R Burbank for 240$ Dick to same for $225. That neither of said slaves as he verily believes was fit for military duty, one of them, Dick was not even enrolled. That During the late raid of one Col Cunningham ^of the U S Army^ with an armed force of slaves in Union County said two slaves were captured on the farm of said D R Burbank in Union County & carried to Paducah or some part to affiant unknown and have never been returned and affiant has been informed that Said Cunningham insists that all said slaves are now forever free & refuses to allow any of them to return— 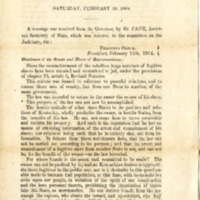 Since the commencement of the rebellion large numbers of fugitive slaves have been arrested and committed to jail, under the provisions of chapter 93, article 6, Revised Statutes.

This statute was framed in reference to peaceful relations, and to ensure those acts of comity, due from one State to another, of the same government.

The law was intended to secure to the owner the return of his slave.

This purpose of the law can not now be accomplished.

The hostile attitude of the other slave States to the position and relations of Kentucky, wholly precludes the owner, in hostile States, from the benefits of the law. He can not come here to prove ownership and reclaim his property. …

For whose benefit is the arrest and committall to be made? The owner can not be profited by it; and no Kentuckian desires to appropriate these fugitives to the public use; nor is it desirable in this questionable mode to increase that population, at this time, with its cumulative evils upon our people, in violation of the spirit of our constitution and the laws pursuant thereto, prohibiting the importation of slaves into this State, as merchandize. No one derives benefit from the law except the captors, who obtain the reward, and speculators, who buy at nominal rates, and by selling, shift the loss upon others. 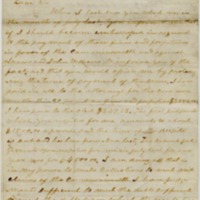 I therefore beg your Excellency to give me further indulgence on the debts first respited by you until times grow better and money can be come at or until I can get a judgment to sell the land and slaves of James & John Williams for the payment of their debts. There was a division of the slaves of the Estate of Jesse Williams among his children on the 1st of January 1861 and five slaves were alloted to James & John Williams which are in my possession except a man who is in Jail under an indictment for Murder, with $900.00 a Boy aged 16 worth $900.00 a woman aged 40 years worth $700.00 A Boy aged 10 years worth $700.00 a girl aged 14 years worth $700.00 There will be about 160 acres of land coming from said Estate to James & John which will be worth $8.00 an acr all of which which will be sold for their debts to the commonwealth & others—the above is all the property that will be coming to James and John from their Fathers Estate, and I have already as above stated paid out for them nearly five thousand dollars, and am still indebted for them to the Commonwealth nearly four thousand dollars as the representative of their father who was their surety—. 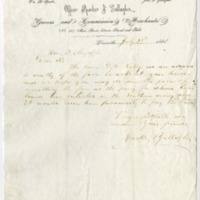 The barer D. C. Kelley we are assured is worthy of the favor he asks at your hands and we hope you may do him the favor of remitting the fine as the party for whome he is bound has enlisted in the Southern armey and it would ruin him pecuniarly to pay the bond. 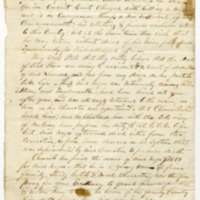 [Petitioners] will State that they verily believe that the death of Said Slave was owing to accident & a want of desertion of said Leonard, and free from any design on his part to take life—That said negro was notoriously vicious headstrong and ungovernable—had been hired out year after year, and was all ways returned to the owner, as soon as his character was ascertained—that Clements had hired him: and he chastisied him with the sole view of making him perform his duty; & not to take life but, said negro afterwards died either from the correction, or from some disease in his system that was superinduced by said correction to produce death

Clements has paid the owner of said negro $1600 for said negro—that he is a young man of fine family, Steady habits & moral character, we therefore pray for your Excellency to grant him a pardon & restore him to the bosom of his family & country & in duty bound they will ever pray &c 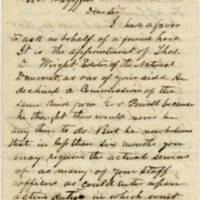 I have recd from Mr. Yancey a copy of his speech in the African Slave trade, delivered in the Alabama Convention the 18th Oct. He takes ground against it viewing it as a question of political economy, contending that the states Composing the Confederacy will have as much slave labor as will be profitable, and he therefore recommends the adoption of a provision in the Constitution prohibiting the introduction of Slaves as merchandize from any foreign source whatever. This will prevent Ky & other slave states that refuse to join the Southern Confederacy from sending their slaves for sale.

From what I can learn since my return this County is largely for Convention. Mr. Wright will have an Editorial in this weeks paper, severely, but I think justly, Commenting on the proceedings of the recent session of the Legislature. 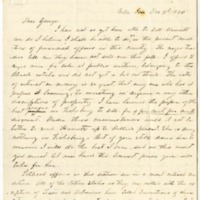 I have not as yet been able to sell Harriett nor do I believe I shall be able to do ^so^ in the present condition of financial affairs in the country. The negro traders tell me they have not sold one this fall. I offered 2 negro men for sale, at public auction, belonging to the Black estate and did not get a bid on them. The rate of interest on money is so great, that every one who has it prefers it loaning, to investing in negroes or any other description of property. I have known the paper of the best paper houses in Vicksburg to sell for 4 per cent, per month discount. Under these circumstances would it not be better to send Harriett up to Miller’s place? She is doing nothing in Vicksburg. But if you still desire her to remain I will do the best I can, and in this event you must let me know the lowest price you will take for her.

Political affairs in this section are in a most critical condition. All of the Cotton States as they are called with the exception of Texas and Arkansas have called Conventions of their citizens or are preparing to do so. A great desire exists to establish a Southern Confederacy, the only question being how shall it be accomplished? Some are in favour of the immediate secession of each state, and then consult with the other ^slave^ states in regard to forming a Union amongst themselves— Others, and amongst them myself, are in favour of having a general consultation with all the Southern States, before either acts seperately. Having the same rights and interests at stake, I think it would be wrong in any one state to take such a position as would ^force^ others against their wishes to join her, without at least first consulting them on the propriety of the course. What will be the result of this movement, it is impossible to conjecture— It has already depreciated property to a most alarming extent, deranged financial ^matters^ beyond all precedent, and created distrust where good feeling should exist. A few months and these grave questions will all be settled.