Food, Farming, and the Domestic Economy

New focus on food, food production, and accessibility today has led historians to rethink how people have eaten and farmed in the past. Wartime Kentucky is a particularly interesting site to explore 1860s foodways and food economies. The state's rural areas and farm families were disrupted by military recruitment of white and later enslaved African American men, not to mention the devastation that both regular armies and irregular bands of guerrillas brought to individual farms and farming communities. Urban food production and distribution systems were strained as overall production dropped, the military consumed significant resources, and new populations of soldiers, immigrants, and refugees strained the infrastructure of Kentucky cities. Individuals who had taken agricultural products and refined them into flour or distilled them into alcohol for the market faced new wartime regulations and taxes that infringed on prewar business models. Below are some selections from Civil War Governors documents that suggest themes in need of deeper research. 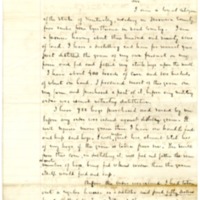 I am a loyal citizen of the state of Kentucky, residing in Harrison County, five miles from Cynthiana in said county. I am a farmer having about three hundred and seventy acres of land. I have a distillery and have for several years past distilled the grain of my own product on my farm, and fed and fatted my stock hogs upon the swill. I have about 400 barrels of Corn and 5000 bushels of wheat on hand. I produced most of this grain on my farm, and purchased a part of it, before any military order was issued restricting distillation. I have 900 hogs purchased and raised by me before any order was issued against distilling grain. It will require more grain than I have on hand to feed and keep said hogs. I will ^suffer^ great loss, almost total loss of my hogs if the grain is taken from me. The swill from the corn, in distilling it, will feed and fatten the same ^or greater^ number of hogs, being fed when warm, than the grain itself would feed and keep. 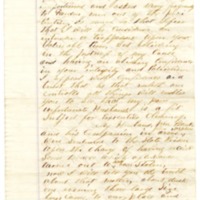 my Husband was only a common Soldier his pay as you know was only $13, per month— which was not enough to support us. the duties which he had to perform were that of being guard at Barracks no 1. So his times was not occupied all the time, So he would Sell various articles of necesities to Soldiers at the Barrack and Hospitals, Such as fruits tobacco and cigars the profits of which in addition to his regular pay enabled us to live tolerably comfortable, But when he got these two packages of tobacco from the Boys, he though he would Sell it at wholesale. hence he offered it ^to^ the grocerymen Saying to the groceryman to Say nothing about it, the reason that he wished him to keep it a Secrect was that he knew that the Police would arrest him for Pedling without licens if they became conizant of the fact, So doing Such a small business he could not afford to take out license hence they requested Secrecy. 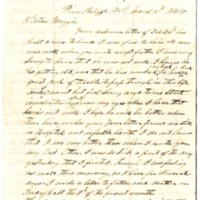 I have had to Spend Some money in buying butter and vetetables that we cannot draw from the commissary department. These things are all very high in the army butter is worth 75cts and and one dollar per pound Green apples have been worth twenty and twenty five dollars per Bbl and have been Since last fall, and other things as high in proportion Whisky Sells for fifty cents a drink and from eight to twenty five dollars per gallon. I have not bot any of it in no form Since our army left Helena We could ^get^ a little there from the commisary department for Sixty cents per gal= Potatoes are worth ten and twelve dollars per Bushel and none Scarcly to be had at that price. We have had a little fight at South bend bend forty mile below us on this river the Rebels captured one of our boats loaded with commisary supplies: but our forces recaptured the boat and took one one hundred Rebel Prisoners 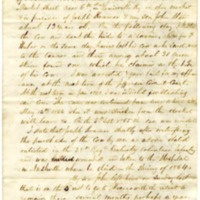 I David Shroeder would respectfully state that in the month of November 1861 I purchased a cow of Joseph Nicholas on Market streret near 6th ^street^ in Louisville Ky in open market & in presence of Joseph Kramer & my son John then about 13 years old. On the following day I killed the cow and sent the hide to a tanner. One Geo F. Huber on the same day having lost his cow as he said, went to the tanner and there among about 20 green skins found one which he claimed as the hide of his cow. I was arrested & gave bail for my appearance at the next term of the Jefferson Circuit Court. 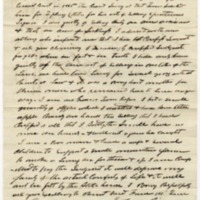 The Grand Jury at that Term Indicted him for Tipling (that is for two acts of selling sprituous Liquor. …we have been Living for several years without Courts or Law & it was a very hard matter for Union men who remained her to sell any way—I am no Grocer or Tavern Keeper I had a small quantity of Apples which I distilled & had some little apple Brandy on hand this selling that I have Confessed is all that I Sold by the Small have no more on hand—& will not again be caught I am a Poor man & have a wife & several children to support a small mountain farm to make a Living on for them & if I am Compelled to pay the Judmt it will deprive my family of actual Comforts of Life & it will not be felt by the State hence I verry Respectfully ask your Excellency to Remit said Fine 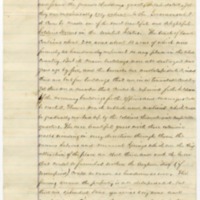 I beg leave to report that I have made a thorough examination of the Western Military Asylum at Harrodsburg Ky and found the grounds & buildings greatly delapidated, Yet they are intrinsically very valuable to the Government & it can be made one of the most beautiful and delightful Soldiers Homes in the United States. … there are ample out buildings of every kind including also fine green houses full of flowers grasseries & vineyards. and especially a very large amount of valuable fruit trees of every new and improved vaieties. There are two large vegetable gardens of about five acres each in a high state of cultivation handsomely laid out one of which alone was sold, last Year about $1000 of marketing after supplying the large family of the occupant. The vineyards are now yielding their crops and a good many barrels of wine are made from them annually … The tillable land would raise all the Corn Oats Hay &c necessary for the Establishment. The grass lands would sustain all the stock necessary to carry it on indeed all the necessary Beef & Pork could be raised upon it and the “House” could be made in a few years self sustaining from the labor of the Soldiers which could be performed by them merely as a healthy recreation 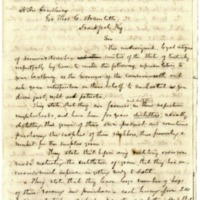 [Your Petitioners] state that they grain they have is nearly all of their own product, and that it is necessary to feed the stock they have on hand. Beside a large number of hogs to be fed by them, there cattle and some mules are kept and fed upon the swill. The grain is absolutely necessary to sustain and keep their stock. The hogs, mules and cattle are necessary for the country and for the army and the use they make of it must inure to the general and public benefit. And the taking the grain from them will inflict a serious and unpardonable loss and injury to them
and to their families, and they ask to be allowed to distil their grain—grain of their own product and that your Excellency procur permission to this effect and protectiion to them against molestation in distilling—They state that they are licensed distillers, have paid to the Collector of Internal Revnew the tax or license fees, as required by act of Congress. 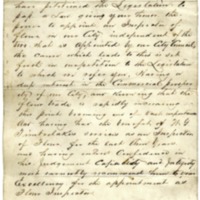 We the undersigned Manufacturers and dealers in flour in this City, have pititioned the Legislature. to pass a Law giving your honor the power to appoint an Inspector of flour in our City independent of the two that is appointed by our City Council, the cause which leads to this is set forth in our petition to the Legislature to which we refer you, Having a deep interest in the Commercial prosperity of our City, and knowing that the flour trade is rapidly increasing this point becoming one of vast importance and having had the benefit of W.G. Timberlakes services as an Inspector of Flour for the last three Years and having entire Confidence in his Judgment capacity and Integrity most earnestly recommend him to your Excellency for the appointment as Flour Inspector. 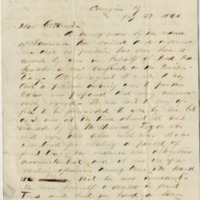 Baker was tried for stealing a parcel of fruit trees; the evidence was altogether circumstantial, and it was the prevailing opinion among those who heard it the evidence, that he was innocent- He was himself a dealer in fruit trees and had on hand a large number at the time of his arrest-The owner of the lost trees examined those of Baker, and thought he identified some of his among them- Baker proved that he had for some time been purchasing trees in the Cincinnati market, but he could not prove that these identical trees had been bought there. 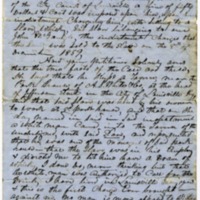 Now your petitoner Solemly avers that the true facts of the Case and these, He says that he Keeps a Tavern, near the Pork house of A. S. White & Co, at the head of Jefferson Street in the City of Louisville Ky, and that said slave was hired by his owner to work at sd pork house, and that on the day named in said in said indictment a white man came into the Tavern of the undersigned, with said slave, and represented that he was one of the managers of said pork house—that the slave was in his Employ & directed me to let him have a Dram of whisky, I done so, never thinking but that the white man was authorized to Call for the Drink 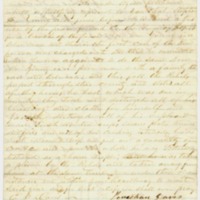 Rebels passed through this county and stoled all of the horses he had which was one in number they took and destroyed all of his beading and clothes for himself and family destroyed all of his cupboard ware such as tea cups saucers plates knives and forks and all of his cooking utencels besides salt Bacon & Beef and fed out a quantity of corn &c and upon the whole he was Litterally destroyed as a house Keeper; and he was taken a prisoner by the Rebels and taken away from home at the same time. 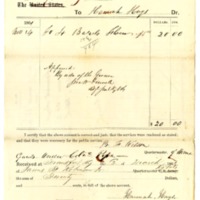 The United States, State of Kentucky
To Hannah Hays Dr

Coal, Gas, and Petroleum →
Food, Farming, and the Domestic Economy